Search from a currently small library

The Richard Dawkins Foundation for Reason and Science publishes on its Facebook page select questions submitted by the public and invites its Facebook community to respond. One recent submission caught my attention in particular, it read:

“Hi, I have two daughters in public school. I had recently got a paper from their school asking if I would like to sign up for a bible study group. The group has children get on a school bus during school hours to attend this. Me and my husband are atheists and we are outraged that a public school would promote such a thing during school hours! We believe school should be for learning, not mindless bible studies! I wonder if this is even legal? I also would like some advice on what to say to their principal about this?” 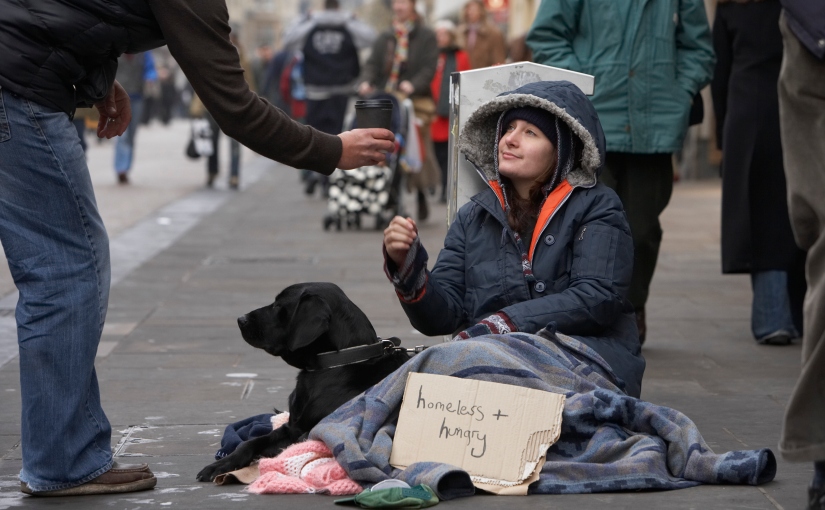 Government can do no kindness. 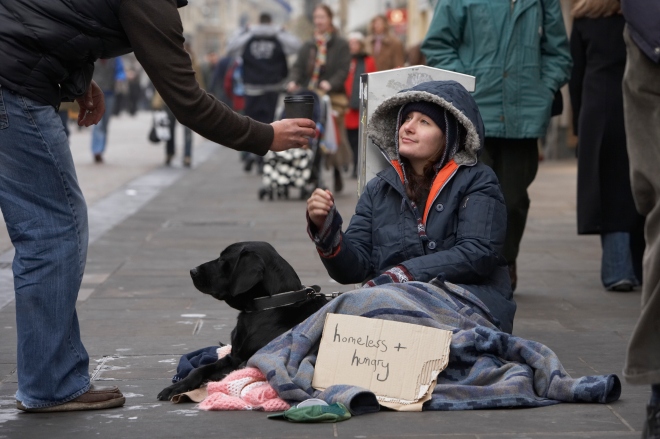 Every day on my way to work I walk past a McDonald’s restaurant. Yesterday I saw a member of staff handing a hot drink to a young girl sleeping rough outside. It was a brief but touching moment between two young ladies of greatly differing fortunes. The former with a low but regular income, a sense of social worth, and a roof over her head, the latter with seemingly nothing more than a sleeping bag.

The hot drink was worth only a couple of pounds, but the thought that someone cares about her and that there is hope was probably priceless to that homeless girl, and just maybe warmed her heart as much as that drink warmed her body.

The episode was a reminder that there are hard-working, respectable and kind young folk out there, many of whom serve us in places like McDonald’s. As well as some, too many…

This question may seem hard to many because they have been raised being taught, “If there is one thing we learn from the war between the states it is that we need to stay together.” It has been assumed that the Civil War answered the secession question, because some people who wanted to secede  were slaveowners.

The main point that one must remember is that the states are the ones setting the terms for the Federal Government. They are the employers, if you will, of the Federal Government. If you hire someone, even if it isn’t written in the contract, you can fire them. The contract that the colonies made with their federal government (otherwise known as the Constitution) lists the only rights that the Federal Government has, and also listed some very important rights the people have.  The federal government violated that contract, so it could and should be “fired”, or in other words, seceded from.  The only problem is that the federal government has shown what it does when somebody secedes, that is fight a war to keep them from doing so.  I don’t know if secession is worth a war that we would probably lose and be mistreated for.  Maybe we should just try to legislate the Constitution back.

Secession is constitutional.  Constitutional does not always equal right.  Constitutional usually equals right, but there are a few parts I would like to work to amend, after we get the basics down.  The North and the South were fighting for different reasons, and both were bad.  The Civil War was terrible, and fought for terrible reasons.  Although it freed the slaves, if America keeps heading down the track it is, everyone, blacks and whites, will be enslaved.

Are you going to choose to do something about it?

Likewise, if something good is gained through compromise, like getting part of a good cause done rather than none, and a little bit of necessary evil, then compromise is a good thing.  If the bad cause gains more from the compromise, it is a bad thing. If more bad is gained than good from any decision, (including making a compromise) don’t do it! There is more good than evil in the world, however, so most compromises are good. If more good is gained than bad from the decision, do it. If the net value of human joy goes up from a certain decision, then choose that path, or one that increases the net value of human joy even more. Finding out the result of your actions, then choosing the altruistic choice is the hard part.

Don’t meddle with other people’s affairs if you don’t have enough competence to make a decision. Study God’s laws to see which actions bring more joy.

My final answer is that compromise is not a good thing or a bad thing until the circumstance defines it, but it is a useful concept to have in your arsenal.

I know that Heavenly Father is perfect, and always will be perfect, because it has constantly been proven to me every time I pray, or am obedient to his commandments.

“For he is the same yesterday, today, and forever; and the way is prepared for all men from the foundation of the world, if it so be that they repent and come unto him,” says  1st Nephi 10: 18.

Common sense and the words of God show that the Constitution describes an ideal government, minus the unfortunate small compromises that had to be made.  Still, it is the best I have seen by far and I am willing to live in it and put my allegiance in it.  No matter what people do to change America it will never change the Republic for which the American flag stands.

Whenever someone puts their allegiance in something that is not God or created by him, they will inevitably sin and therefor suffer, but they can still always repent.

12345Brynlee Wright is an amazing young woman.  I love to talk with her all day.  We talk a bout History, Politics, Religion, Comedy and many other subjects, just for fun.  We like to make up parables about silly people and ideas.  We also make up fun “what-would-you-do-if…” stories.  We think of a crazy scenario, and ask the other what they would do if it happened.  Then, we tell them the result of their choice in the made-up world, and go on until either they die, or achieve world peace.  I hope she knows how much I love her.

12345If you think about the word Ignorance, it means ignoring.  I think that when we are being ignorant, we are ignoring our conscience and what we know to be true in order to be comfortable and feel safe in the present.  This is essentially stealing from our future selves, and often others.  We break our parents hearts (both Earthly and Heavenly), and we also usually hurt others.  In the future, we suffer for it, because of nature.  It is only through the the Grace of Jesus Christ that we can repent for being evil.

12345God defines Intelligence as truth and light, which is the essence of Goodness.  He does not mean worldly wisdom or cunning.  Light is a substance that reflects in all directions helping us decide what is going on around us.  Truth helps you make better decisions and feels good in your soul.  If we pay attention to our conscience, The Spirit, and what we have learned in our lives, we will be kind, loving, leaning, and proactive.  We  will be happy and will help others do the same.  We will never achieve perfection in this life, but it is still achievable eventually.

A silly, heathen word that worships the made-up goddess, Chance.  I used it in my paper merely for the sake of style.

12345It is never, in any situation, acceptable to do any form of evil.  The title of this essay is easy to answer.  The implied question in the title, however is not as easy:

12345Or perhaps, a better question to ask might be: What is Goodness?  You and I are merely ignorant mortals.  We cannot hope to ever answer this question on our own.  The answer is really more like an array of answers and statements.  God has revealed many parts of the answer to this question through ancient and modern prophets, and personal revelation to other individuals.  A simplified answer is that Goodness is obedience to God, and Evil is disobedience to him.

12345Since this essay is for a class about the American Civil War, I am certain this question is preparation for discussing the way that the North treated the South during the war.  The implied question is: Was it okay for the Union soldiers to ravage the Southern countryside the way they did?  First of all, I would like to ask, why do we care?  Why should it matter to us wether or not the north was in the right or not?  Shouldn’t we only care about what we should do in our own lives?  Why, it’s our old hobgoblin, the “foolish consistency,” of course!  We Americans have been brought up being taught that the Northerners were the “Good Guys,” and that the Southerners were the “Bad Guys,” and being young, we accepted it.  If the North was evil, then that would mean that we were wrong that whole time we believed it!  Another thing causing us to wish that the Union soldiers were the Good Guys is a concept I read about in Ezra Taft Benson’s The Proper Role of Government.  He called it “Collective Guilt”.  Since we live in the Union, we feel somewhat responsible for any evils done by the Union in the past, and we feel uncomfortable facing that responsibility, that isn’t ours!  Don’t be ashamed, fellow Americans, for what those who came before you have done to their slaves and each other.

12345I do not think it was “okay” for the North to burn homes and fields of civilians, but I do not know one-hundredth of all the factors that went in to the war, so I am not in any place to answer that question.

12345In the poem The Odyssey, Odysseus was loyal to his wife by coming home (after ten years, but I guess that was necessary to fit in all of the stories, and buy his son enough time to grow up).  He was disloyal by Christian standards, but the Greeks had no sexual standards for males, and he made no vow to have sexual fidelity, so he was sinning in ignorance.

12345Odysseus wanted his men to live, but he spent many of their lives in order to get home, and the remaining ones spent their lives to have a meal, despite his counsel.

12345When Odysseus came home, he tested his wife to see if she was still loyal to him, and at the same time she tested him to see if it was really her husband who had been gone for twenty years.  They both passed each other’s test.

12345I think that Odysseus was loyal, but did not have standards that were very hard to stick to, though he did risk his life many times and give up immortality to get home, which required a great deal of loyalty.